Featured Song of the Week: Thriller, Michael Jackson or for fun... go here. 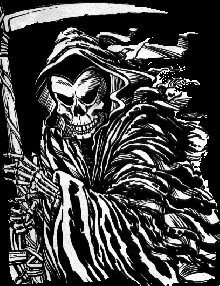 I have never been a huge fan of Halloween. I suppose it's because there was never a huge emphasis put on any holiday when Terry and I were growing up. It is also a holiday that revolves around the occult, and I've always been a little creeped out by it. Don't get me wrong... I can come up with another list of movies that hit this genre... note to self... top 10 creepy movies.... Night of the Living Dead... Halloween anything with Bela Legosi.... Being married to Michael, Halloween has become more fun for me, since it is one of his favorite holidays...(I still get creeped out). Over the years we have a developed a couple of traditions that we are obligated to uphold... Pumpkin carving, watching It's the Great Pumpkin Charlie Brown and now, Blair Witch Project.... Michael loves to be scared... not the kind that causes one to scream or be "grossed out", but rather the kind that causes that tingling on the back of your neck... he loves that... but don't we all?

Small pet peeve...when did Halloween become cute? I thought it was supposed to be a little frightening... what are these blow up things on peoples lawns? When did "icicle lights" become scary Halloween decorating? I want tombstones and spiderwebs and blood and skeletons and jack o lanterns.... these happy black cats and smiling ghosts... ugh.... Cute is restricted to Charlie Brown... that's it... Michael and I still compare fall nights to the sky scapes in this classic cartoon...

Be that as it may... courtesy of Nickie Goomba go carve your Halloween pumpkin here and go Whack a Ghoul.

I will leave you with this....one of my favorite short stories...

all clipart courtesy of Halloween Clipart.

Oh my God, Cathy! I was going to do the EXACT same thing with the Tell-tale Heart. It's my favorite, too!
And it sounds like Michael and I were raised in the same house- So next year I'm coming to your house, for a Halloween frightfest. Halloween is my favorite too.
Have a good one, guys.

YEP - - traveling - - should have called! Now I have to decide whether or not to visit Kentucky (Brother) some time this week since Hubby's away!

I love it Cathy, I mentioned your blog in my Halloween post at my Blog. I am not sure if it shows up for you at yours or not. I am so new at this.
I loved the Poe story!!!!
Happy Halloween

Although we didn't carve pumpkins this year, we did watch the Blair Witch project..in the dark... and It's the Great Pumpkin Charlie Brown and I heard Glen Beck's rendition of The Tell Tale Heart. All in all, creepy enough..... for this year.

"Listen to them. The children of the night. What music they make."
Count Dracula

Cathy
I am an independent, patriotic, conservative with a passion for fine art. I'm devoted to my husband and all the things we find important- our time together, our family, our country. I'm forever a pessimist, but doing my best to change that.